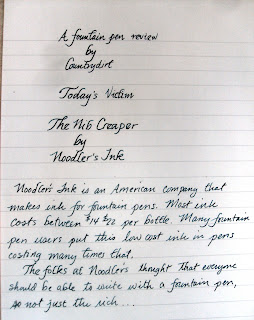 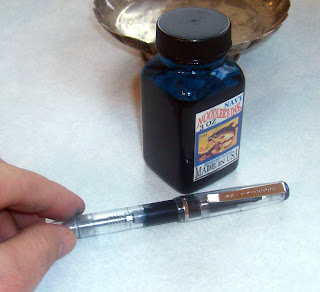 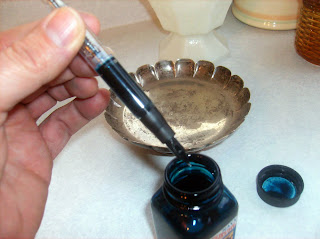 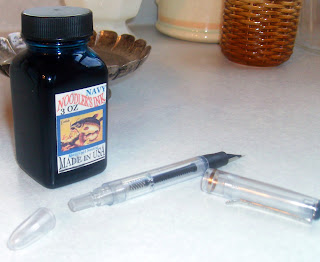 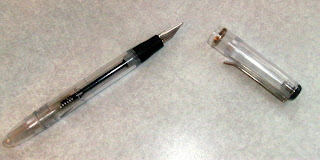 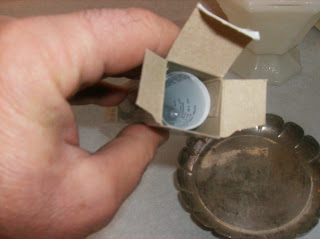 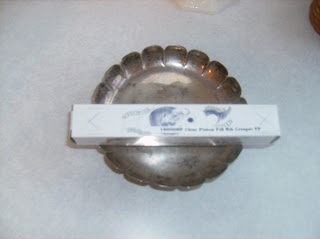 This is my first attempt at a review on this blog. My photography skills are questionable, my writing skills are feeble, but I have a passion for handwriting and fountain pens, so here goes!

I decided to try out a couple of pens to consider as a possibility for Christmas gifts. Brian at the Goulet Pen Company was gracious enough to etalk me through some considerations for inexpensive pens. He reviews several of them on his blog . Much buzz has been astir about the $14.00 Noodler's Nib Creaper fountain pen, a piston filled inexpensive pen. I thought I would check it out.

My first impression about this Noodler's Ink pen was it was fun to see the internal mechanism. My second thought was a question as to what ink I would "deflower this virgin" with. I set my eyes upon Noodler's Navy. Filling the pen is dead simple. You remove the blind cap on the barrel of the pen, run the piston down to the end of the barrel, place the nib and part of the feed section into the ink and cycle the piston twice. That's it. Pull the pen out, wipe off the nib and feed, replace the blind cap and get down to writing.

The Nib Creaper holds an impressive amount of ink. It appears to be at least twice as much as is held by a Lamy, Waterman or Cross converter and about twice as much as a Reform 1745 German school pen with a similar filling mechanism. I expect it also holds about twice as much as vintage Sheaffer lever fill pen. This could be a problem if you tire of a color quickly and would rather not write it completely out, but it should be very simple to dump the ink back in the jar and flush and fill again with your next choice.

The nib is a steel nib in a F or perhaps M size. The nib says Noodler's Ink. In writing, it is smooth and leaves a consistent line. I have not written with it enough to determine if it will have any type of shading or line variation. But for my use, smooth and ease of use is important.

If I compare this pen to any type of rollerball, ultimately it will be much more economical. The pen cost $14 and a 3 ounce bottle of Noodler's ink costs $12.50. So I have $26.50 invested. I expect I will be able to fill this pen 40 times at a minimum per bottle of ink so my cost per fill is around $1.16. I think each bottle will last much longer than that, getting my cost per fill down to about a quarter. Tell me you can find any rollerball pen that costs that little and will provide as much ease of writing.
Posted by Troy Mayfield at 8:26 AM 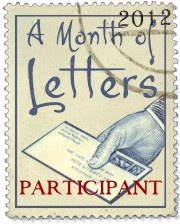 Other geeks I read!

What you need to know about me

Because I am curious